Gastric bypass surgery is the most frequently performed bariatric surgery. The procedure reduces the size of your stomach and helps you feel full faster. Before deciding to undergo the major surgery, you should learn more about what it entails.

How Gastric Bypass Surgery is done

Gastric bypass surgery begins with putting you under general anesthesia. Then, the surgeon operates the procedure either laparoscopically (using instruments through multiple small incisions) or traditionally (making one open incision). In gastric bypass surgery, a small part of both the stomach and the intestine is bypassed.

First, the surgeon uses gastric staples to divide a small part of the stomach. This small pouch can hold a minimal amount of food while bypassing about 90% of the stomach. Bypassing the stomach leads to less absorbed calories and quicker weight-loss.

He or she will also split the small intestine into two. The lower part is called a roux limb and it is brought up to be connected to the gastric pouch. As a result, the food can also bypass a portion of the intestine to provide mal-absorption of fat and other food components.

César Roux was the first surgeon who described the procedure. In addition to that, the final result of a gastric bypass surgery resembles the letter Y. That's why the procedure can sometimes be referred to as Roux en y gastric bypass.

In this method, the surgeon makes 4 to 6 incisions that are about 1/4 to 1/4-inch long. Through these incisions, surgical instruments will be inserted. With the aid of a camera, the surgeon can perform the surgery without needing to make a large incision.

Usually, the Mini Gastric Bypass is effective for people with a BMI of 35 and several obesity-related conditions.

Should I get gastric bypass?

Gastric bypass surgery can help you lose about 70% of your weight in a year. Achieving a weight that is closer to your ideal means you can wear your favorite pants without having to opt for the plus size section in a clothing store. But above all, bariatric surgery can reduce the risks associated with life-threatening conditions, including:

If you have already tried diet and exercise programs and your efforts have been unsuccessful, a bariatric surgery like gastric bypass might be ideal for you. But keep it in mind that most physicians recommend undergoing lifestyle modifications before going under the knives of surgeons. Also, it is essential that you are willing to adapt to such changes permanently.

A gastric bypass candidate should be between 16 and 70 years of age. In some cases, the patient can be over 70 but that could increase the risks associated with the surgery.

If you are a woman who is planning on getting pregnant, you should know that you must not get pregnant for at least 2 years following the surgery. You are going to lose weight rapidly after the surgery and the nutritional deficiencies can seriously harm you and your developing baby.

The BMI range for most gastric bypass candidates is 35 or higher (obesity). However, extremely high BMI (over 40) can increase the risk of complications. People with extreme obesity are usually advised to try losing weight using dietary programs and exercises.

In some cases, people with lower BMI (30 to 34) who suffer from weight-related conditions can benefit from undergoing the procedure as well.

Gastric bypass surgery and sleeve gastrectomy are effective bariatric surgeries aiming to reduce the size of the stomach and limit the food intake. Both procedures can help you lose weight and put an end to life-threatening conditions related to obesity. With both surgeries, almost the same amount of weight will be lost in 12 to 18 months which is approximately 70% off the original weight. Still, there are some differences worth mentioning:

While both procedures aim for the same thing, the technique is different. Depending on your condition and expectations, each technique can benefit you in a way. Be sure to work alongside your doctor to choose the one that suits you best.

Gastric bypass surgery can guarantee 50 to 70 percent weight loss in the first year. You might encourage more weightloss by exercising and eating healthy.

Basically, there are three main weightloss milestones after gastric bypass surgery. In each stage, you can expect to lose a percentage of your weight.

12 months: In a year, you might feel like the course of your weightloss is happening at a slower pace. By this time, you will have lost 70% of your weight.

18 months: With regular exercise and sticking to a diet, you can improve your weightloss. Ideally, you can achieve 78% off your weight.

Every individual's diet plan can be different depending on his or her physical features and particular situation. The general diet plan after a gastric bypass surgery involves multiple stages:

In a day or two after the surgery, you should drink clear liquids only. This prevents your stomach from stretching out before healing completely. As soon as your stomach can handle the clear liquid, you can begin drinking other types of liquids such as:

Within a week, your doctor might allow you to have pudding-like foods. You can make these foods at home with a blender. Make sure there are no pieces of solid food in the mixture. You should have 5 to 6 meals a day in a smaller portion. Make sure you eat your meal as slowly as you can.

Within several weeks and by your doctor's permission, you can build soft foods into your diet. Easy to chew options like soft-boiled eggs, cooked fish, and canned fruits are good choices, to begin with.

In about two months after the surgery, you can reintroduce solid food into your diet. Start by chopping your food and eating small bites. Your stomach is still sensitive and eating large bites might lead to obstruction in the stomach. There are some foods that you should avoid during this stage:

In about three to four months you can return to your normal diet. However, you should still control your portion, avoid rapid eating, and have a balanced diet including necessary nutrition.

What you need to do before getting Gastric Bypass

How much does Gastric Bypass cost in Iran?

In Canada, they charge between $11000 to $20000 for single gastric bypass surgery. In more affordable countries like India, the gastric bypass cost is about $7000. In Iran, however, you get to undergo gastric surgery efficiently and affordable at only $3000; this is almost 50% lower than India.

After the surgery, you might have to spend two days a week at the hospital. The decision is made by your surgeon based on your healing progression. You will have to take time off from work for at least 3-5 weeks. You may have to stay in Iran for 2 weeks before you could fly back home. Our healthcare professionals will be at your service during the recovery progress.

Generally, you have to follow some basic instructions after the gastric bypass surgery:

Risks and Side effects

Since gastric bypass is mostly performed laparoscopically, it is one of the safest bariatric surgeries. But as with any major surgery, there are some risks or complications associated with it, including:

All bariatric surgeries are considered major procedures and might pose some risks. However, most surgeons think it's one of the safest procedures available.

Feeling pain after the surgery is considered normal. It can be easily controlled in the hospital and at home.

Your stomach might stretch back to its previous size if you neglect the dietary instructions. 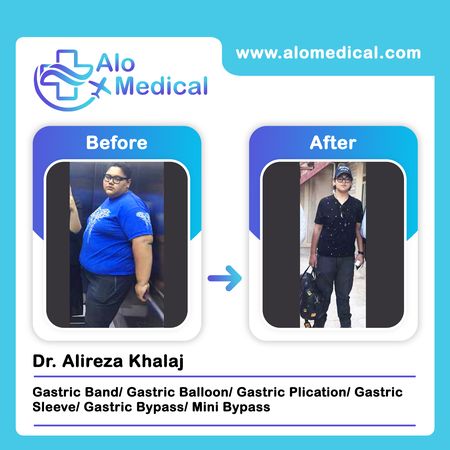 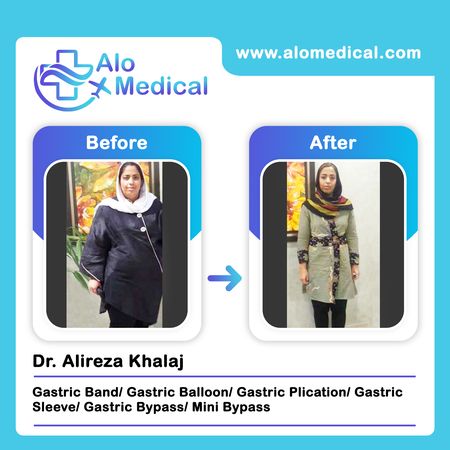 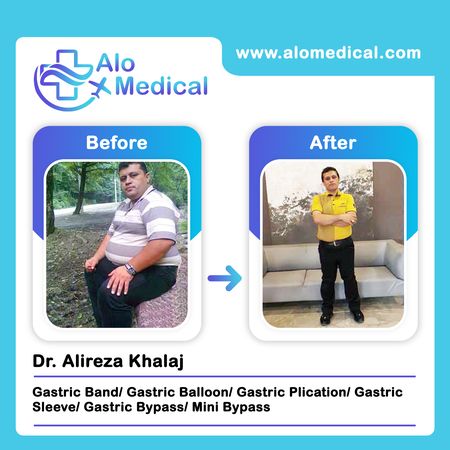